Inductively coupled plasma mass spectrometry (ICP-MS) and optical emission spectroscopy (ICP-OES) are by far the most powerful techniques for trace and ultra-trace element analysis. They offer excitation/ionization temperatures as high as 10000 K, relative freedom from chemical interferences, long particle residence time, simultaneous multi-element analysis capability, and detection limits in levels as low as part-per-billion (ppb) to quadrillion (ppq). These features are indispensible for sample analysis in the environmental, geological and geochemical, clinical and biomedical, forensic, and semiconductor fields as well as many other.

ICP-OES and ICP-MS technologies owe their success to the advantages provided by ICP which is an unparalleled excitation and ionization source for many spectrometric applications. In spite of their major benefits, ICP-based generation systems suffer from a couple of drawbacks. One is the high consumption of R.F. power which is accompanied with its inherent R.F. interferences. Even today, a common ICP-based system needs around 1.6 kW power to perform acceptably for some sample types (e.g., organics). Generally, bigger generators are needed for obtaining higher powers which makes the whole system take more space. More importantly, R.F. shielding is costly and more challenging to implement at higher powers.

More importantly, an impediment to faster development of ICP-based devices throughout the world is their high consumption of argon. Despite several efforts in reducing the argon flow rate, on average, a typical ICP torch still needs around 12 – 17 L/min of argon to keep the plasma analytically efficient and protect the quartz torch from any damage. At this rate, typical size 1A cylinders runs out of argon in about 8 hours and should be replaced regularly. Argon is typically produced by fractional distillation in large cryogenic air separation plants. Naturally, the process is very costly as well as energy-consuming. In a world concerned with environmental issues, now more than ever, reducing the amount of energy consumption, whether directly or indirectly, is of great priority. Therefore, reducing the argon and power consumption can result in more compact and efficient ICP-OES and ICP-MS systems.

Recently, we developed a new generation of ICP torch in CACT. Using computer simulations, we were able to carefully investigate hundreds of different design concepts, in terms of fluid flow, heat transfer, and electromagnetic field effects, and reach an optimum design. These studies eventually gave birth to a completetly new ICP torch with "conical" geometry comprised of only two tubes as opposed to the three-tube design of conventional torches. Due to the conical geometry, the gas velocity is increased by a factor of 3 which, in turn, allows for reduction of argon consumption by 70%. In addition, the power density inside the torch has been increased for at least 4 times which makes possible to reduce power consumption by 50% compared to conventional Fassel-type torches.

Using optical spectroscopy, we were able to compare the performance of the new torch with the Fassel torch in detail. The conical torch has been proven to provide 1000 – 1600 K higher rotational/excitation temperature, 5 times higher electron number density, 3 times higher robustness (Mg II/Mg I ratio), lower interference from easily ionizable elements (e.g., Na), and lower multi-element detection limits. These improvements are due to the special geometrical design of this torch which aslo provides higher plasma stability and resistance against extinguishing factors such as ingression of air, organic samples, or samples containing high amounts of dissolved solid. 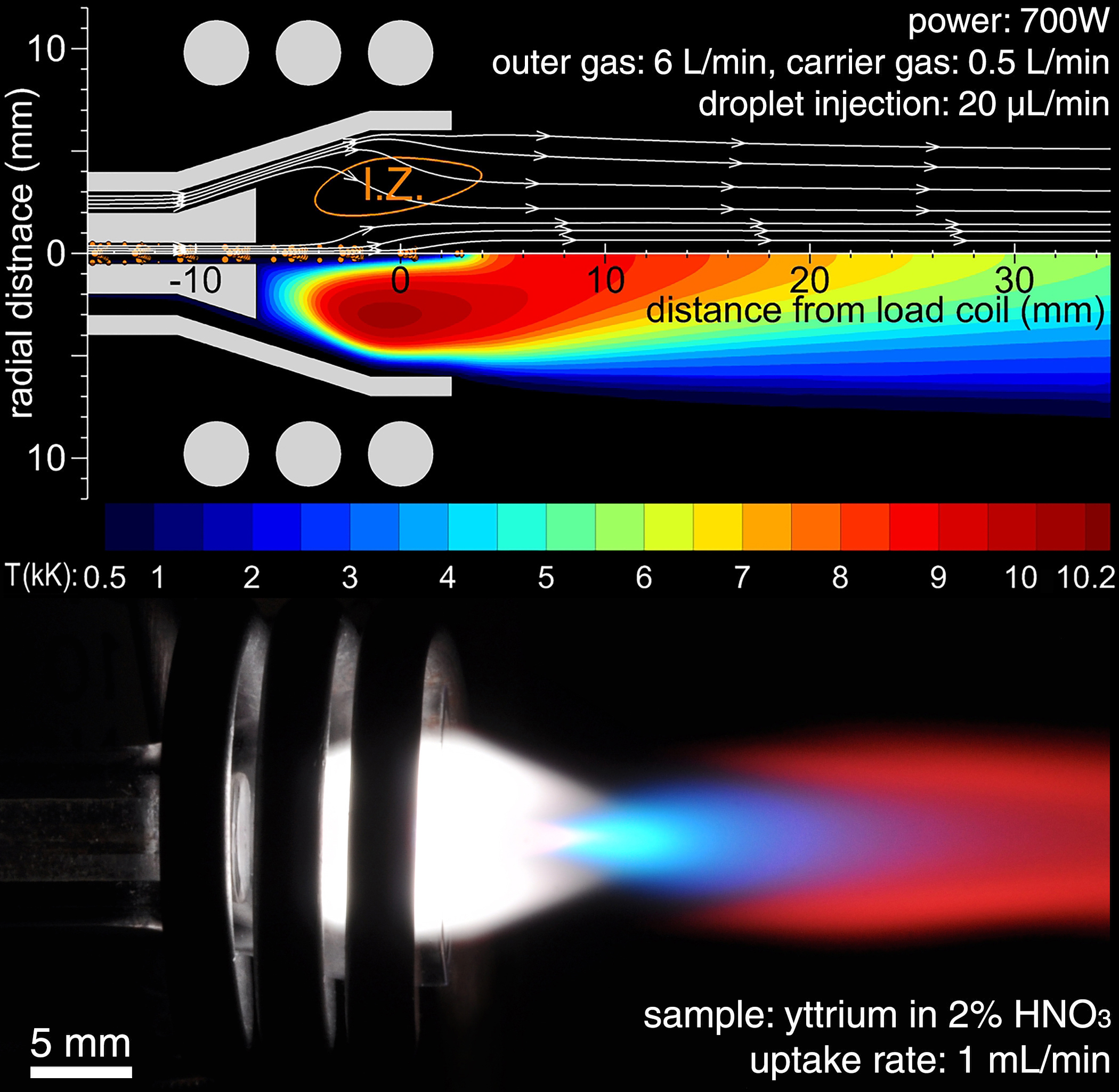 The figure on the right shows a comparison between the new conical torch and the conventional Fassel torch for various operating conditions. Initially it can be observed that the plasma generated by the conical torch is brighter than the one generated by the Fassel torch. Furthermore, by introducing a solution containing yttrium to both torches, various analytical zones inside the plasma can be distinguished. The bright blue emission is due to excited yttrium ions which is associated with the normal analytical zone of the plasma. It can be readily seen that the conical torch exhibits a brighter Y II emission even with 700 W power compared to 1500 W for the Fassel torch. This is while the conical torch is capable of working with only 7 L/min argon for the outer gas, compared to 15 L/min for the Fassel torch. As shown below, the multi-element detection limits provided by the new torch are also equivalent or lower for most elements. 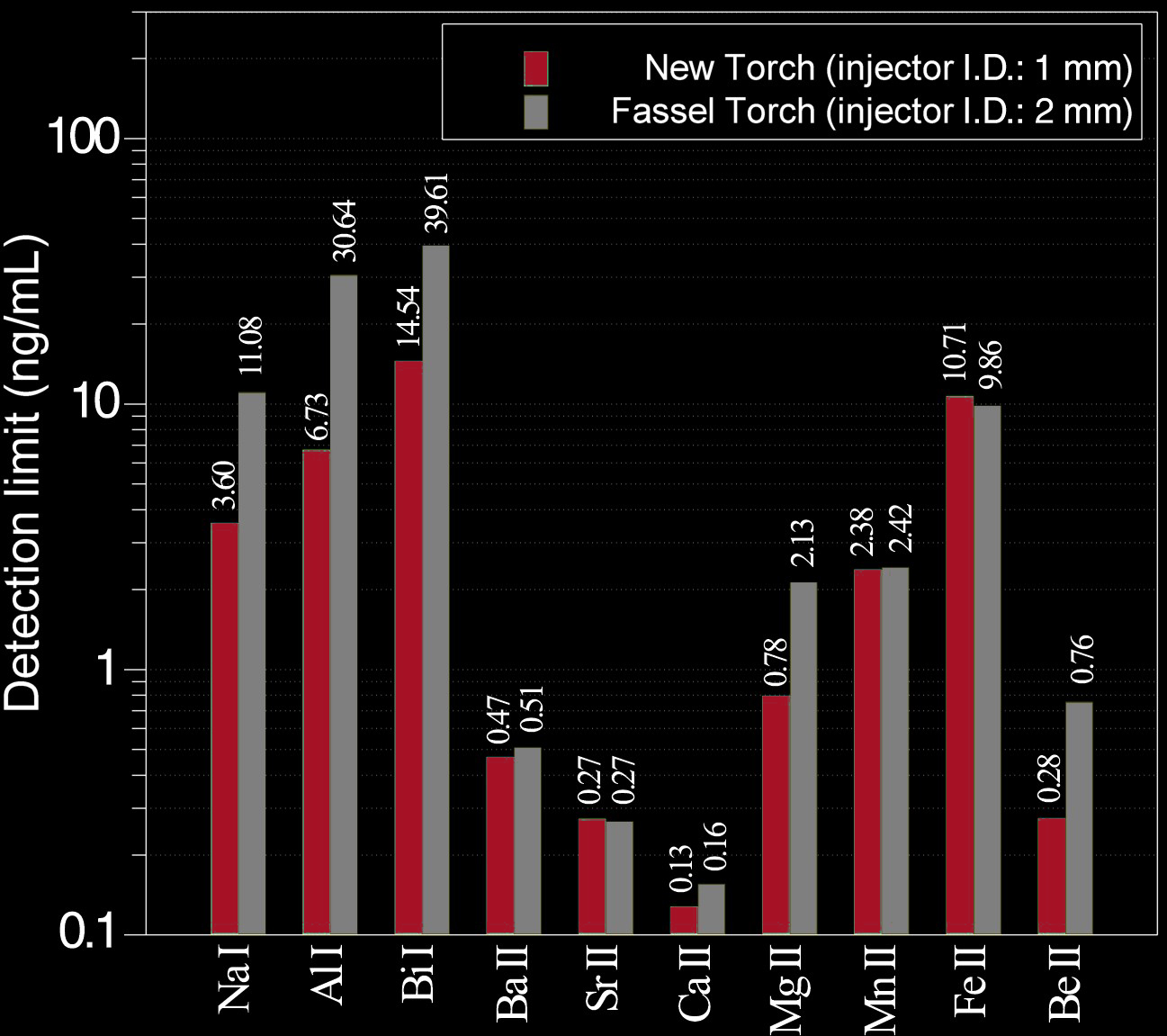 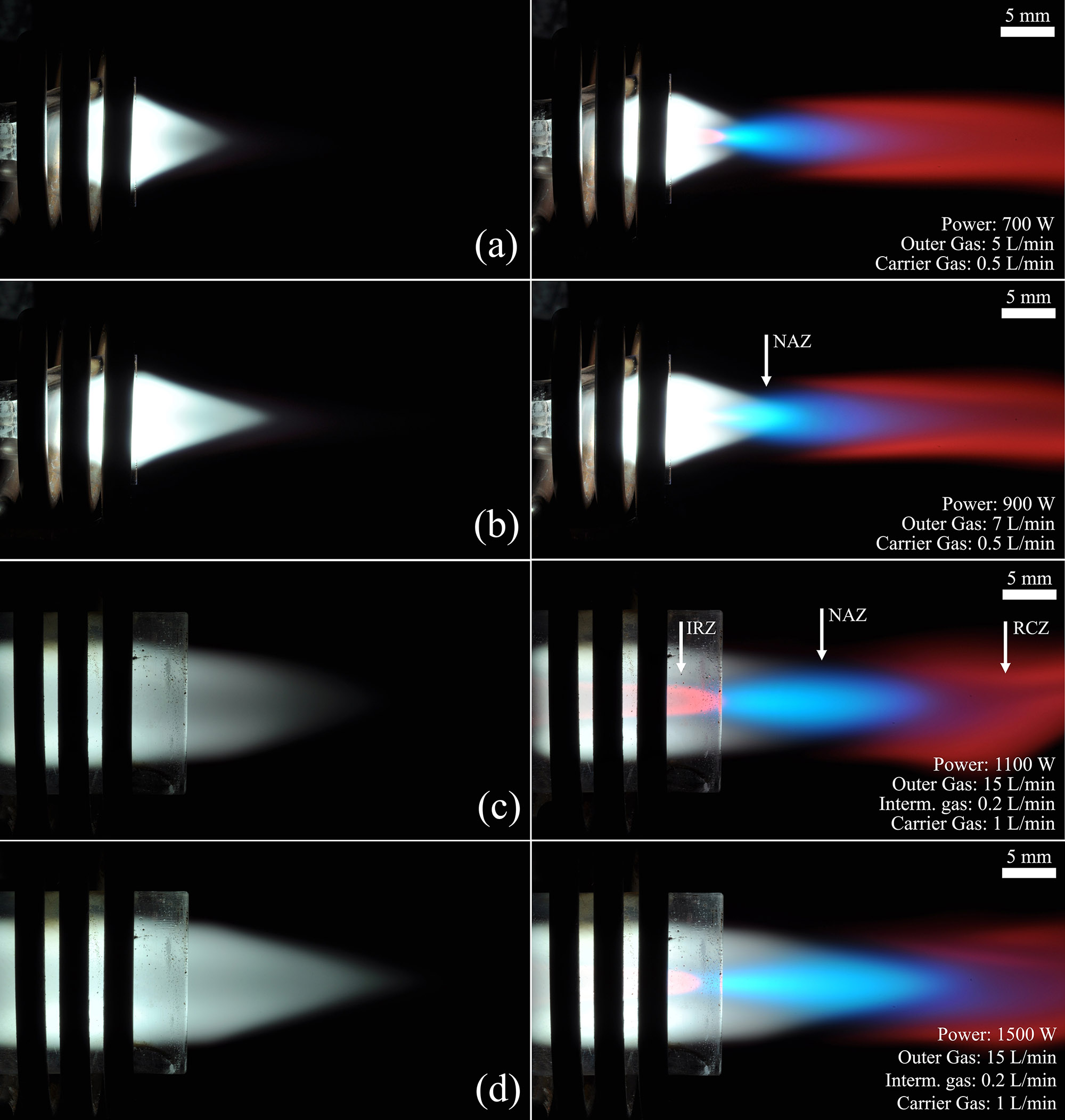